What’s in a name? How about, surprise goodness. Or smoothie by happenstance. Maybe, I can’t believe this mixes together so nicely.  lol!

I have to say that I was a bit surprised by this combination. The first one I tried happened because I was hutting around for fruit and, well, all the exotic stuff was gone and all I had left where pieces that I was tied of eating. I had a beat-up pear, an older kind of soft apple but that wasn’t enough. I dug around in the freezer and found some strawberries and thought what the heck.

That adventurous happenstance turned out nice enough to want to share with the rest of the world. And, well, here it is! 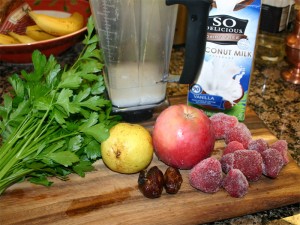 Add everything but the greens to you high speed blender. Grind to a liquid. That might take about 10 seconds. 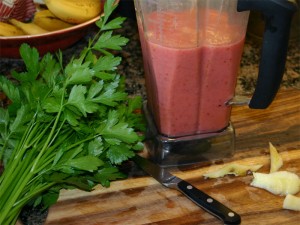 Next, add your greens. Remember, green smoothies are all about getting your greens in a way that is raw and enjoyable. As you can see, I try to always use a ‘bunch’ of parsley. The stores are pretty good about selling bunches in the size that works perfect in a smoothie.

Now blend again. This time, after the greens are chopped, you’ll want to spin the blender on high for about a minute. The longer you go, the smoother the smoothie. At the same time, the longer you go the warmer it gets. Because we’re using frozen strawberries, you shouldn’t notice any heating in that 60 seconds. 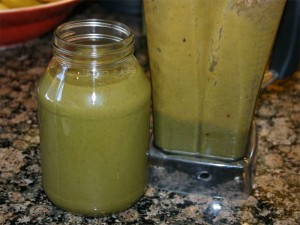 In the end, depending on the size of the fruit that you use, you’ll get 4 to 5 cups.

Even if you have an aversion to parsley, you might find this one a little more tolerable. If you  like parsley, you’ll probably really enjoy this one. If you love parsley (like me!) you’ll want to make this smoothie a number of days in a row!

Remember, if you get to experimenting with green smoothies, it always helps to keep the Green Smoothie Basics in mind. They taste best when balancing sweet, sour, salty and bitter. Once the balance if found, it then a matter of accentuating the flavor!

I love parsley! When I was a teenager, I would buy it by the bunch and eat it like eating a bouquet of flowers. People that observed this behavior called it ‘grazing’. Looking back, I now think of it as a little weird, but that doesn’t change the fact that I love parsley!

I’ve been looking for nearly two years now for a combination of ingredients that would significantly mask the taste of parsley so that my wife, who really doesn’t care for anything be the taste, would not complain about a parsley smoothie. Normally, all she has to be is in the same room as a parsley smoothie and her spirit gets all worked up. She absolutely detests parsley smoothies!

Well, as it turns out, for the last three days she’s had parsley smoothies without knowing it. And, better yet, each day I asked her what she thought of the days’ smoothie and she’s said “Ok” and “good”, but still complains that it’s too thick (parsley tends to congeal when it gets broken down, thus it’s jello like if you don’t thin it out.)

So, I’m going to have to say that this parsley smoothie passes the Lori test – which is a pretty high bar to get over! 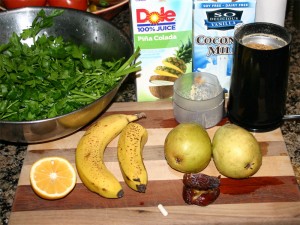 If you haven’t noticed, one of the key principles of the green smoothies that I make is that there needs to be an incredible base of liquid to really bring out the flavors in the smoothie. In this case, it really is a must have to include the Dole Pina Colada mix! Without this, it just wouldn’t be the same.

Funny thing about this juice was that a friend came over on the weekend and had a couple pina coladas but left leaving half a container of mix. Not wanting it to go to waste, I figured I’d add it to a smoothie or two. Well, I’m glad that I did for this smoothie would not be the same without it.

Back to the preparation process. Throw everything together and blend.  J 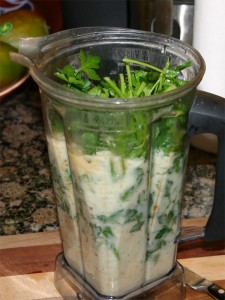 Well, actually not everything. Add Juice first, throw in bananas, slice pears adding everything but stem and seeds. Pit the dates and add. Squeeze the lemon making an effort to not allow the seeds in (adds bitter taste). And start the blender for a few seconds to break up the bigger pieces. Now grind the flax seed in your old coffee grinder until fine (and standing) add to smoothie. Add probitic and then cram in the parsley.

Blend again and give it 60+ seconds on high. When you feel the side of the blender and you can sense just a little heat, stop! 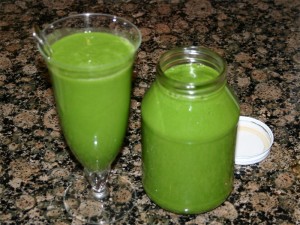 It’s at this point that you taste it. Is it sweet enough? Peary enough? Creamy enough? The taste that should stand out is the Pina Colada mix and pear granules (those little specs of pear that don’t grind up).

I’ve got one more bunch of parsley, two pears and a couple bananas so I’m sure this will be on the menu for tomorrow. After that, back to mangos! Got a collection of those for under a buck yesterday and one’s almost ripe.

See you next time!

The thing that makes this smoothie outstanding is the sesame milk base. Sesame milk is so easy to make and it adds a bitter sweet full bodied texture to the smoothie that doesn’t happen if you simply use water. If you’ve never made sesame milk before, you can read about it in a previous posting here.

I guess the other part I like is the garden fresh parsley! Yes, out of all the greens that I blend up into breakfast food, parsley is my favorite. But it’s not spinach! Everyone loves spinach. Parsley takes a little warming up too, if you know what I mean. Its flavor is much stronger and, if you get the standard curly parsley at the store, it always leaves your mouth feeling like it’s eaten something a little too strong.

That doesn’t happen with this garden parsley. It’s fresh and smooth tasting. Every time I visit the garden, I can’t help but pinch off a couple leaves and chomp them down. I get no negative reaction and my breath is left parsley fresh!

If I could grow more parsley, I’d make it my green of choice. 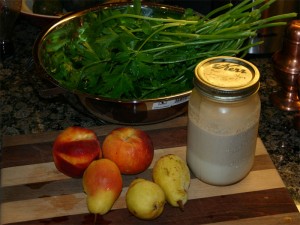 Notice I didn’t need to add dates to this smoothie!  I LOVE it when the fruit really is ripe and sweet. It makes a huge difference on the resulting flavor of the smoothie. If I haven’t already said this enough – always use ripe fruit!

After I pack all the fruit in and press the greens down hard enough so that I can get the lid on the blender, it sure makes it look like I’ve used a lot of sesame milk.

And look at those parsley leaves!  Yum. This is the broad leaf Italian verity that grows a couple feet tall – but only in warm weather. The plants seem to go on hold if it’s not 70+ outside. 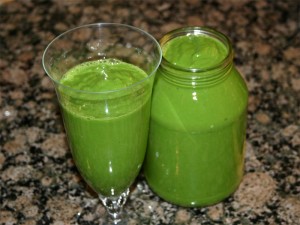 Parsley always turns out thick. You really have to add something like water to get it into a drink like consistency. But for me, I love them thick.

If you’ve never made a parsley smoothie, right now is the best time of year to give it a try. Let me know what you think afterwards.

Day two and I get to enjoy this combination a second time! What a bumper harvest I’m experiencing this year – that is, for greens! I guess I went out of my way to make sure there were enough greens to last all season. And, as you can see from the collection of smoothies lately, all the greens have been from the garden!

But you’ve got to try this combination. Yum. 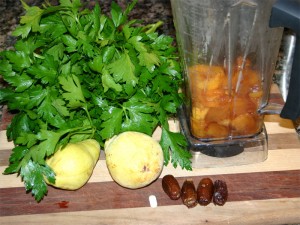 If you ask me, this is a can’t lose mixture. Of course, parsley is probably my favorite green and the peach- pear combination is my favorite fruit combo, so this one is just made in heaven.

Combine everything into the blender with wet fruit on the bottom. 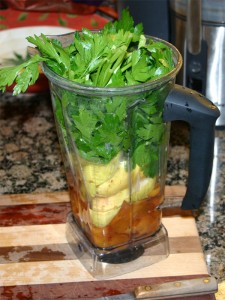 After sixty seconds you’ll get the best smoothie ever! 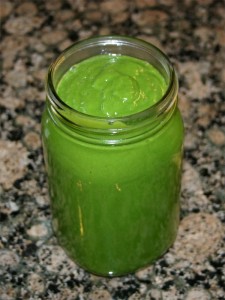 If you drink this one with a straw, you’re going to have a hard time sucking it through. It will go through for it’s so fine, but you could hold it sideways and it will pour like ketchup – slow and steady. If you want to give it a little more flow, add half cup water during the blend.