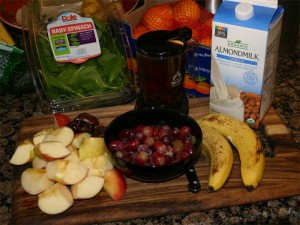 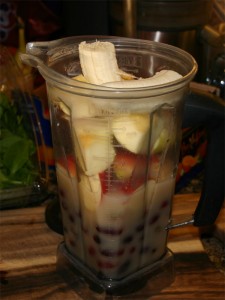 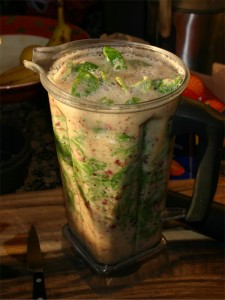 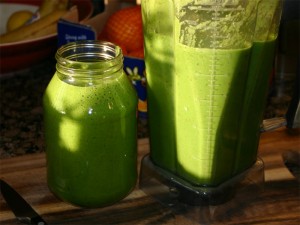 One of the beautiful things about living in the Northwest is the bounty of blackberries every august. They grow wild and nearly everywhere. If you put in just a little time, you can get bowls full of the fresh, mildly sour fruit. If you have a little land, chances are pretty good that you might already have blackberries growing in your backyard – just like I have!  It’s fuss-free and delicious!

For a couple weeks during the summer, I take the extra ten minutes to pick a few cups of berries for the morning mix. Blackberries come at the same time as Swiss Chard, so it seems natural to combine the two and enjoy the summer bounty.

This smoothie has grit. It’s sweet and sour and a bit more runny than what I usually make. You kind of need something to wash the grit from between your teeth, but overall it’s a great middle of the road (flavor wise) smoothie. 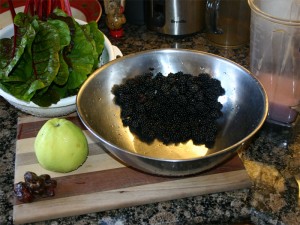 No date or apple seeds, and place the wettest fruit towards the bottom of the blender. 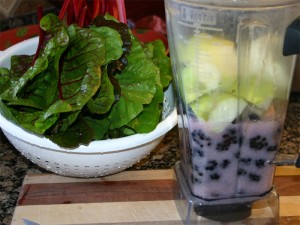 Blend for a few seconds. 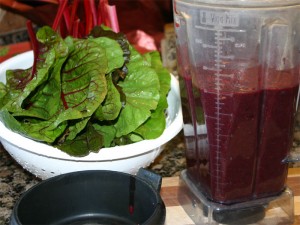 Add the greens and blend for another 60 seconds on high. If it’s too seedy for you, add some ice and blend longer. Careful not to overheat the mixture. 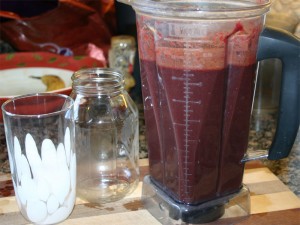 The berry mixtures that you can pick up at Costco work well as a substitute for the fresh blackberries. If you pure them straight from the bag into the blender, you’ll also cool down the mixture allowing for a longer blend time. The longer the blend, the smaller the grit.

Seems that it’s getting harder and harder to find uniquely new green smoothies to post! But, it’s still possible and I’ve found another! This triple berry smoothie is a delight – flavorful and rich. You’ll want to give it a try.

A couple weeks ago, I started to cut down on coconut milk in my green smoothies. Sure, it provides great texture and flavor, but I wanted to remove a little fat – or, rather – move the fat consumption to later in the day. With the green smoothies, I wanted to get back to just greens and fruit.

But I still don’t recommend water as the base, thus for the last few days I’ve been playing around with “Help Nourish Your Brian” (lol) juice.  Not wanting to put the extra work into making juice for the base, I’ve taken the easy way out by using commercial juice. But what’s special about this juice is that it tastes like pomegranates. It actually has a pretty strong flavor.

And, well, that’s what I’m looking for! This particular juice accentuates the “Nature’s Three Berries” mixture (blueberries, raspberries and blackberries). When you use the strong dark juice, it adds to the berry flavor in this smoothie. This strong flavor definitely covers up the Swiss Chard flavor (beet flavor) that’s typically hard to hide.

I’ve made this one for the last couple days and it’s not getting old. I highly recommend it for you’ll find it easy to get extra greens this way! 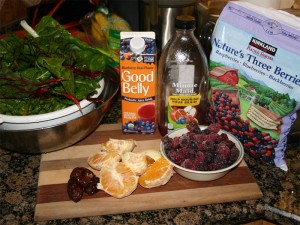 Remove the seeds from the dates and peal the oranges and add all the fruit to the blender. 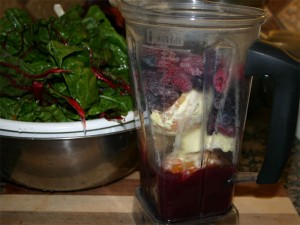 Give it a spin for 15 seconds or so. It will come out like ice-cream! 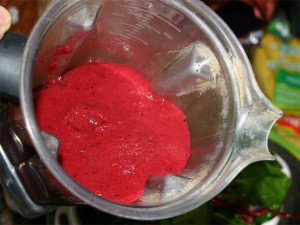 Be careful pressing in all the greens. It will take some muscle, but you don’t want to splash the mixture onto your clothes – this stuff is natural dye! Once the greens are packed in, blend until smooth. You’ll want to let this one run for a while in order to really break down the seeds. Because the seeds are frozen, you can run this one for a while. Feel the side of the blender. If you feel any heat, you’ve definitely run it long enough! 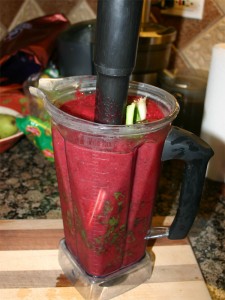 The recipe I list here makes 2 quarts. When they taste this good, I find a way to work the second quart into my day. Note that the oranges are ‘filler’ so if you don’t want as much, cut back on the volume of orange you add in! 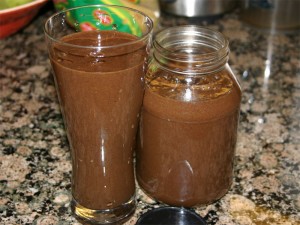 There are so many great tasting green smoothies that I’ll bet I’ll be posting new recipes for years! I can’t wait for cherry season; it’s just around the corner. I’m sure it would do well as the berry mixture in this recipe!

Consume life, be life, give life – light is life!

Ready for something different? A sweet green smoothie maybe? I know it’s been a while, but I’ve found another recipe that’s worth blogging about. This one reminds me of the blueberry sorbet that I’ve blogged about before (here), but it’s not going to give you brain-freeze or require you to eat it with a spoon. Yet, it’s got the great taste of blueberries, a hint of banana and the sweetness of candy.

I’ve used apples before for this combination, but it’s just not the same. The pear really does give it an extra texture that apples just can’t provide. Also notice that the banana is not too ripe. If they are two old, the flavor gets really strong. Stay young with just a hint of green in the stem.

If you find yourself wanting a great blueberry smoothie, consider this combination. 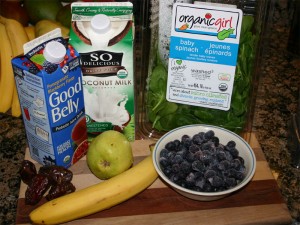 You could even use more spinach if you wanted with this one. If it’s too thick, adding more coconut milk would not be out of the question. Add liquid. To which you’ll add everything else. Remove the seeds form the dates and core the pear. 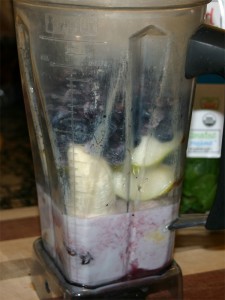 I always give the fruit the first spin. This way, when I add the leaves, the liquid will draw them down to the blades better. 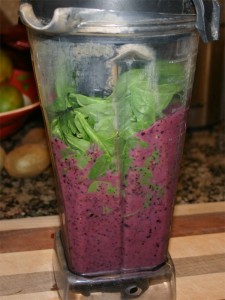 Look at that beautiful color combination! (I think I need to scrub my blender again.) 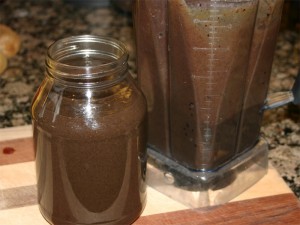 Unfortunately, the resulting color is more like mud. Lol. I have to admit that it tastes a lot better and you’ll probably find yourself coming back for seconds here.

Get your greens and enjoy them at the same time for if it doesn’t taste GREAT you simply won’t stick to it.

Well, I have to say that it’s been a while! Sometimes, there’s so much to do in life that finding the time to reflect upon what you’ve done in a blog post doesn’t always work out! If this spring is bringing energy your way that is anything like what I’m seeing, you might also be finding that it’s more work than play. But I’m ok with that. Life is full of cycles, this one just happens to be more work related!

But work doesn’t take me away from my ritualistic green smoothie! Virtually every day I take time to mix up and enjoy some concoction that enlightens my entire morning. It’s just too easy! And they make me feel good.  J

This particular smoothie lifted my spirit for a number of days in a row and I don’t know how anyone can say that that’s a bad thing. It felt good. Yet I know, some people like to vary what they consume every day. That’s good. But when I find something I like, I love it when I can stick with it for a few days to really stretch out the positive effects. This time, I was lucky enough to have all the ingredients in a ready state to go for this smoothie. When I pause to really thing about this, I believe that the stability and longevitiy of the fruit in this smoothie is what makes this one so easy – everything is ready to go!

I can’t quite pinpoint what it is exactly that I love about this one, but it’s chilly (from the frozen blueberries), saucy (from the apples) and full bodied (from the oranges). There is a smoothness from the spinach that is offset by the grittiness of the seeds (from the blueberries) that makes it more than a drink and more than satisfying on the tummy. 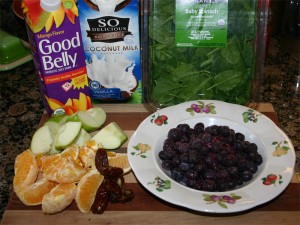 The beautiful thing about these smoothies is that you just toss everything in the blender and let it fly (on high) for 60 seconds or so. 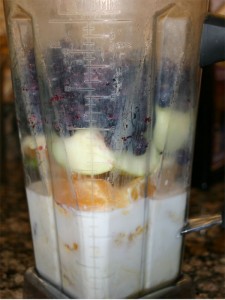 The volume and weight from the liquid will easily pull down the light fluffy spinach so it won’t take much to get all this to liquidate.

Oranges are for volume – and they are a little cooling so make sure it’s a warmer day if you add more. In the end, you’ve got breakfast and lunch – or smoothie to share – which is what I do! 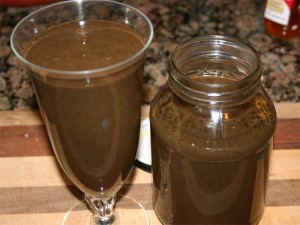 This fruit combination does really well with Swiss Chard, so if you’ve hit your limit with Spinach, you can add in chard and enjoy the combination for another few days!

Stay light-spirited – for the moment is what you make of it!