It’s been a while, but I’ve found another recipe that’s once again worth sharing. I’ve seen versions of this one on different videos and blogs over the years, but I’ve never really gotten around to reproducing them or playing with the flavors. That is, I’ve always tried to over complicate the treat by trying to make it more like a conventional truffle. Well, it doesn’t have to be complicated. In fact, it should be simple.

There are three things that really stand out about this recipe. 1) Its easy. 2) It tastes great and 3) it will keep you wired for hours! I’m really shocked at how wired someone can get off just a little raw cacao. I make it a point now to not eat these any later than about three in the afternoon. If not, well, you’ll find it really easy to not fall asleep in the evening. I guess if I was going out, this would be the perfect pre-function snack. 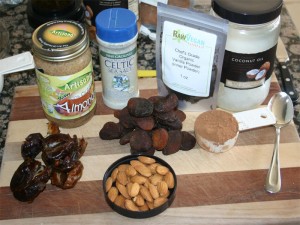 Add the dried fruit to the food processor first and chop until it’s as fine as possible. Apricots tend to break up into little square pieces. Cherries break down further, but the idea is to get it broken down while it’s still mostly dry. Next, add the vanilla powder, salt and Almond butter. Spin the food processor a bit longer. The mixture should break down even more. After it starts to stick together a little, add the dates and coconut oil. It won’t take long after that before you’ve got a big ball of paste. 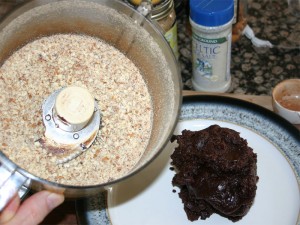 It might actually feel more like fudge. This batch felt and tasted a bit like the filling in a Fig Newton. It was a bit tacky, yet kind of dry when it was pulled apart. As you can see, I piled it up on a plate and then reused the food processor to break down the raw almonds. You want to break them down into very small pieces, but not as fine as flower.

I didn’t take a picture, but at this point I rolled the ‘fudge’ into little round balls. I like them small. If they are too big, everyone wants to bite them in half and then crumbs fall all over the place. If they are small, it’s just one bite and no mess!

Note that the almond crumbs are for rolling the balls in. It makes them easy to pick up for the oil in the mixture will get on your figures, but not if there is a coating of something to block it. 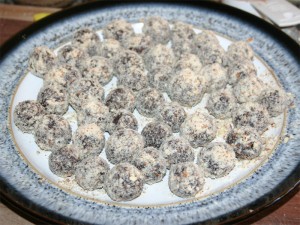 This recipe makes a couple dozen (as you can see in the picture). 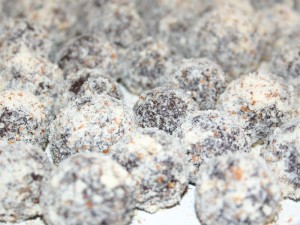 I love the fact that I can take a half hour and make a plate full of snacks for the week. I’ll probably take 4 or 5 a day everyday for lunch until they’re gone. I couldn’t tell you the count of calories, but I get the feeling that it’s not too bad. The cacao in it makes for a great pick-me-up after lunch. I can see myself making a lot more of these in the coming months. The only really tricky ingredient is the almond butter. Yet, I figure I’ve got ½ a jar left so I can make a couple more batches!

You are what you eat! – Thus, I must be a little nutty!