Turns out that it’s not as hard as it first appears to make Rejuvelac! Mainly just takes time for there is very little work involved. And the taste, well, it’s not bad! It definitely doesn’t have the impact on me as the Kefir Apple juice has on Natasha from Raw Radiant Health! It’s pleasantly yeasty, with a little tang. This is something that’s actually doable! 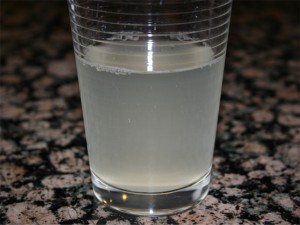 Notice the light white color and the bubbles at the top. When this is brewing, you can see the motion in the water. When you touch the container, the bubbles all kick loose and rise to the top. My second batch looks to have a bit of a darker color to it.

Here’s what I did.

I followed the common sprouting instructions for the wheat. That entails soaking the wheat for 8 or so hours, rinsing and letting sprout for another 48. I’ve got a standard quart size mason jar with a sprouting lid that works just fine. (I’ve got a picture of the sprouting jar here.) Then, after rinsing them a last time, I poured the seeds; roots, stems and seeds into a two quart jar for brewing. Using an eyedropper, I measured about 3 tablespoons wet ORMUS onto the wheat and then covered with distilled water. I believe the last time I tried to do this I used regular tap water – which most likely was the reason for the bad tasting finished product. You basically want to make sure you don’t kill the wild yeasts on the wheat by overdoing any chlorine. Once the jar was full, I lightly placed the lid on and set it on top of the fridge to brew. When I felt like it, I gently turned the bottle to mix up the water just a little.

After brewing for 48 hours or so, I stirred lightly and poured most of the water into the serving container that I could store in the fridge. I purposely left some ORMUS that settled on the bottom and some extra fluid to turbo-charge the second brewing. I figure that shouldn’t take but 24 hours.

One of the better descriptions that I found for brewing can be found on the Superfoods~for~Superhealth website in their Rejuvelac Recipe page. The only thing that I did differently is that I didn’t blend it before hand. That just seemed like too much work for this simple drink. And, because it has ORMUS in it, I really wanted to see how it would be absorbed by the micro organisms.

I wish I’d taken a picture of the mixture an hour or so after I set it up to brew. The ORMUS that was in suspension settled out on the top layer of wheat giving it a ghostly – snowy look. As the yeast went to work, the ORMUS thinned out and nearly disappeared. A small layer ended up on the bottom of the jar, but I’d guess the rest went into solution – which is exactly what I set out to do.

Now comes the second half of the experiment – the consuming of the tonic! So far, it’s not bad. Actually, it’s pretty good. In a couple weeks I’ll update the story, but for now, it seems to agree with me.

Oh, as a side note, the probiotics that I’ve been taking, well, I set out to test them. I found that, because they are yeasts (just like Rejuvelac) they will grow in a sugar water mixture. Well, that is, if you have a good – living – probiotic!  At the same time that I started the Rejuvelac, I also mixed up some sugar water and placed the contents of a probiotic capsle in it. The Rejuvelac is done, and I can’t see any growth what so ever with the probiotic starter! What really makes me feel bad is that I spent 33 bucks on that jar and I know it’s all just simply dead. Looks like I’ll have to try to get my money back.

Hope you find the motivation to start and make your own Rejuvelac!

Oh, a thought just came to me! I’ve been meaning to make some raw seed cheese, well, I know have the rejuvelac that I can use as a starter. Looks like I’m going to have something else to do this next weekend!

6 thoughts on “ORMUS based Rejuvelac – it works!”