This year’s gardening project is going to include ORMUS. Thus I figured I’d start the experiment in a public forum – here – to outline the steps and document it over this next growing season.

As any ready long timer reader would know, last year’s growing season really wasn’t all that great. I was able to grow greens, but nothing else really took. There were times during the season when I had to pull plants for they weren’t doing all that well (downright bad to deathly). This year, I don’t want to have to pull anything! I’d rather have the plants good and healthy from the start.

On top of that, I want to consume the healthiest plants! Everyone always says, healthy plants taste better. Well, I’d like to be able to tell the difference. I have to say that last year I got some great tasting veggies, but this year I’ll be looking closer at the taste – if I can get the plants to produce better!

That’s where ORMUS comes in. I’ve followed the ORMUS community for quite a while now and seem to have ‘feelings’ regarding how it should be used. Intuitively, I feel the roll of ORMUS is as fertilizer. I’ll probably go into that feeling in more detail in the future, yet my studies have lead me to believe that the best way to consume minerals is in their bio-available form. That is, as part of a molecule.

If you cut out the metaphysical aspects of ORMUS, what’s left is a great collection of simple minerals. If you look closely at this collection of minerals you’ll see two important characteristics: The magnesium and Potassium levels are fairly high (minerals that are essential for converting sunlight into sugar) and the minerals are in a monatomic form – small enough to be absorbed by the plants.

If you think about it for a while, plants have to get their minerals in their individual form in order to use them in molecules. You don’t see chlorophyll molecules with collections of Magnesium at its core, but you see single atoms there. Thus, placing large amounts of single atom minerals in the soil simply seems to make sense.

It also makes sense to unlock the minerals from its crystalline form – salt. The ORMUS community claims that the sodium-chloride structure captures the monatomic atoms and keeps them locked up. It’s only after you dissolve the water and the minerals are in solution that they become available for use. Unfortunately the sodium-chloride mixture is so concentrated you have to be careful about using it. Thus, the precipitation of minerals that happens during the ORMUS making process allows for the flushing of the ‘salt’.

Doing a little research, I’ve found a website called Sea-Crop that has a bit of information regarding using ORMUS as fertilizer. Their fertilizer is built off Pacific seawater and they’ve got some great results documented on the site.

The problem is that it’s fairly expensive. The website shows it at $60 a gallon. If you consider their application directions, they suggest 2 to 4 gallons per acre.

That is not very much!

My experience with precipitating minerals from Dead Sea Salt leads me to believe that one cup of salt will yield about ½ cup precipitate. That’s 8 or so tablespoons, which should be enough.

The only unknown in this equation is how concentrated is the Sea-Crop fertilizer? I’ve bought some before and it looks like the typical precipitate that the wet method produces, but looks can be deceiving. At the same time, I would guess that the manufacturing process would remove as much water as possible as cheaply as possible. Yet, it’s not a paste so they aren’t filtering the water out. If I use just straight precipitate, I’ll have to be careful to measure exactly how much so as to make this study reproducible for anyone else.

Now, what about the salt?

To start with, I’m going to visit Saltworks and see if I can pick up a simple bag of Dead Sea Salt. From their website, it shows that the mineral content shows up something like this:

This is perfect. I figure that a good start would be 5 lbs for I only need a cup or two of salt.

To go with this, I’ll need some Sodium Hydroxide for raising the pH so the minerals will precipitate. And, as it turns out, I’ve still got plenty of that for it only takes a few teaspoons to precipitate a cup of salt.

If you are not familiar with the process of precipitating minerals from sea water, it’s outlined in a previous article that I posted called ORMUS, Is this the web method?

Now, for the experiment.

I have a collection of raised beds. In the center of the garden where the sunlight is very similar, I’m going to select two beds to use. One will be the control and the other will be the ORMUS bed. In each bed, I’m going to partition it into a bunch of sections. I’m thinking peas, beans, lettuce, spinach, parsley and tomatoes (or whatever else comes to mind as the season starts) in equal portions in each bed. In other words, if I plant 20 pea plants in one bed, I’m going to place 20 in the other. The locations where the peas go will be the same relative position in each bed.

Here are the two beds as they sit this winter. 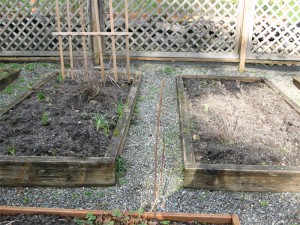 As the season progresses, I’ll take photographs of the plants in these two beds. At different points of time, I’ll also count the fruit provided by the plants and comment on the size. If I see a difference (or not) I’ll comment on it here.

One of the main reasons for this experiment is because of the trouble that I had growing multiple different items last year. The weather didn’t play out as normal and the plants where definitely stressed. If we end up with another odd year (which it’s playing out that way so far) I’d like to see if ORMUS minerals will have remove the stress that plants experience.

Stay tuned, for I’m pretty sure I’ll have something to comment on over the course of this season.

1 thought on “ORMUS as Fertilizer”