I can’t believe it took me this long to think of making home make coconut milk! Almond milk is so common and nearly everyone learns to make that right off the bat, but coconut milk isn’t usually on the list. I mean, I’ve been making sesame milk for a long time, but the thought of coconut milk just never seemed to grip hold.

That all changed the other day when shopping at Wholefoods. I’ve been buying small bags of shredded coconut for different deserts and it dawned on me that they also sell flakes in the bulk section. Turns out, dried coconut flakes are pretty cheap. It was at that same moment, that the thought of making the flakes into coconut milk hit me.

Thus, into the blender it went! I followed the standard rule 1 part nut to 3 parts water and let it whirl. What came out was warm coconut milk.

Here’s what I did. 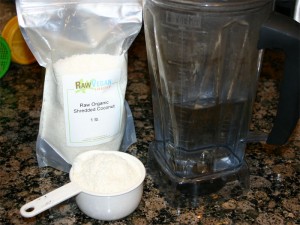 As I said, 1 cup flakes to 3 cups water. I used just a little more here so that I’d get a full quart full.

After blending for nearly two minutes, just when I could feel a little heat on the side of the blender, I poured it into a nut milk bag. 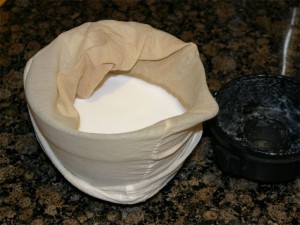 I’ve got a nice measuring bowl that fits the nut milk bag perfectly. I work the bag over the bowl so that just one corner of the bag sits on the bottom of the bowl. Thus, when I pour in the unfiltered milk, the top half of the bag stays nice and dry. After lifting the bag, so that I can gently press out the liquid, the bowl go from a frame for the nut milk bag to the receptor of the milk. 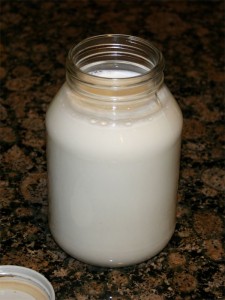 After cleaning out the bag, I poured the milk into a quart jar so it can go straight into the fridge. With luck, the oils will congeal on the top of the quart. That oil, along with the milk, makes for a great addition to a green smoothie!

Remember, as you saw in my A Warming Experiment article, oil is a good thing! Oil provides a ‘fuel’ that helps keep the body warmer longer. In the case of adding this to a green smoothie, it offsets the cooling properties with a little bit of warming.

Give it a try. I’m sure you’ll enjoy it also!