With this season being about 45 days late, yesterday was the first day where I actually got to harvest something out of the garden – Mint! It’s at the perfect age and height. As you can see in the mug (below) I’ve picked just the top six inches (or so) getting the best four sets of leaves. When in the garden, I samples a few leaves and they were delicately succulent and beautifully flavorful. I love the first of the season spearmint.

For the last couple days I’ve been craving mint-chocolate as a smoothie flavor. Last time I dug into the mint to put this combo together, the mint was older and a whole lot more pungent. This mint is smooth and subtle so I knew it would add a delicate savory essence rather than an overpowering one. If you’ve got some mint growing where you can get it before the sun burns in a lot of flavor, you’ll love it combined with cacao!

Here’s what I did, I’m sure you’ll enjoy something similar. 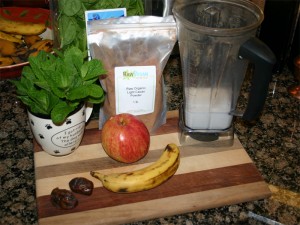 Seed the dates, core and remove seeds from the apple, pinch off the leaves from the spearmint add all but the seeds to the blender and whirl until smooth. 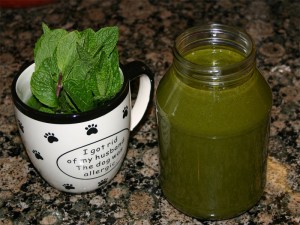 I’ve got a few leaves left over for tomorrow. I’ve also got the second half of the package of Spinach. I’m going to give it a second go with an orange rather than the apple to see how that mixes up. Orange, mint and chocolate should be a really good combination.

Get out, grow some herbs and enjoy the life they bring to your own. Mint’s one of the easiest to grow and mixes will with lots of things. And, the best part is it’s good (great) for you.

Sometimes you come across something that you can totally relate too! This little video from Meredith Frantz (and her boyfriend – from The Raw Seed) has just that. Not for the fact that they are wearing vests on Friday or that they have that stoned look to them, but for the fact that you buy coconuts from Asian markets not Whole Foods!

That comment in this video is so true! The coconuts at Whole Foods just don’t … move. It’s like they buy them just to say they’ve got ‘em. It’s not about making quality nuts available to their customers, but it’s about upholding their image. Thus, I almost always just walk right by them.

The unfortunate thing for me is that the Asian market is now another 3 miles away.  They moved – the wrong direction.

In any case, I’ve included their video for it has a key point in it that anyone buying a raw young coconut will want to learn. Being the spoiler that I am, that information comes at just about 2:45 into the video. The bottom of the coconut will give away the state of the interior.

Without further ado, the video… Oh, watch out for that cleaver she’s flinging around!

I have to admit that I’m impressed by the way she chops that nut open. My guess is that she’s opened more than just one of those puppies. His technique is a little stiff.

But that’s not the point here. The nuts shouldn’t have dark spots, soft spots, discoloration or splits in the bottom. And the one thing that they didn’t mention is always pick out the heaviest one first! The heavier it is, the more liquid it has in it.

I guess picking out a coconut shouldn’t be all that hard. Just keep the above tips in mind when you go shopping and I’m sure you’ll be satisfied with you chop your way into it.

This is too good to pass up – gravity explained. I remember being taught that gravity is the force of attraction between objects and that gravity just is. It’s something that just happens. It’s kind of like electricity – it just happens. With electricity, people have figured out how to get it to flow and perform work, but they still can’t explain what it is. With gravity, it’s even worse – people can’t reproduce it and they can’t really explain what it is.

Well, not anymore! At least that’s the way it comes across.

I came across these videos where a man (Mehran Tavakoli Keshe) claims to have reproduced gravity! And, more importantly, he openly talks about the general concepts in a way that anyone could understand! I highly recommend spending the time viewing these videos before they disappear!  Lol.

Each video is about 10 minutes long, so you’re looking at 50 minutes viewing time.

The video is so good, I think I’ll put his book on my wish list.

My favorite part is when he talks about the interaction of the plasma fields having a by-product called light. I would say that warrants a little more investigation.