As it turns out, this Red Kale mixes really well with blueberries! I would have never guessed – but my yoga instructor did!

I’ve always reached for the lemon to tame kale, but it looks like there is a match in the berry-world. 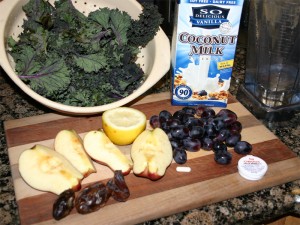 I can’t believe when I was putting this one together that I totally forgot the blueberries! 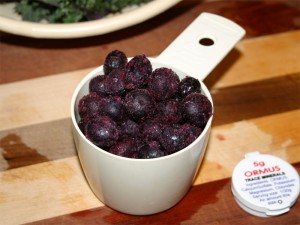 Like most other smoothies that I put together, liquids first followed by soft fruit than harder fruit. In this case, water, coconut milk, lemon juice, grapes, blueberries, quartered apples (or even smaller) and dates. Blend until big chunks are broken down. It should taste fantastic at this point. Kind of like blueberry sorbet. 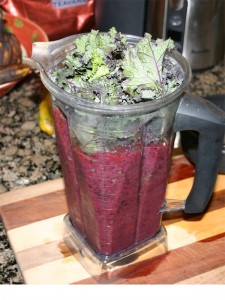 Next, stuff in kale and give it a good spin. The frozen blueberries will keep this on cold for a long time so blending can go for almost two minutes. When you get to blend this long you really break things down to the point where it’s easy to drink.

Finally, add the ORMUS and probiotic and give it a good mixing. Not need to go long, just stir it around. 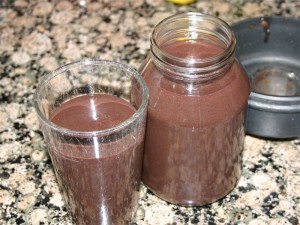 I think I’ve found a new way to love kale. I’m also warming up to blueberries.

If you’re having a hard time getting to like kale, try this combo. I believe you’ll find it quite satisfying!