The other morning, I woke up impressed to investigate the cellular level digestive process in relations to light and how it affects human energy. Over the years, I’ve heard people make claims like “we are bodies of light”, or “the body runs on electricity”, but it always sounds a little odd or misplaced, for we don’t ‘plug’ ourselves in like you’d plug in a light bulb. At times, I’ve almost wanted to laugh when someone says “I’m a light worker.” Yet now, I’m wondering if there might be some substance behind the claims.

The first thing that my investigation led me to was photosynthesis.  Searching the web, we find a simple definition at YourDictionary.com.

On the surface of things, we all know that chlorophyll aids in the transformation of radiant energy into chemical energy. Yeah, I know the definition doesn’t explicitly say “chemical energy”, but what does ‘into a chemical form’ really mean?

The Wikipedia gives us a little more information about this fascinating transformer Chlorophyll:

Chlorophyll molecules are specifically arranged in and around photosystems which are embedded in the thylakoid membranes of chloroplasts. In these complexes, chlorophyll serves two primary functions. The function of the vast majority of chlorophyll (up to several hundred molecules per photosystem) is to absorb light and transfer that light energy by resonance energy transfer to a specific chlorophyll pair in the reaction center of the photosystems. Because of chlorophyll’s selectivity regarding the wavelength of light it absorbs, areas of a leaf containing the molecule will appear green.

The definition goes into greater detail, but the key idea here is that the chlorophyll molecule absorbs a specific band (or bands) of sunlight and uses it to create organic compounds at the molecular level. To expand upon this a little, we go back to the definition of Photosynthesis and look at the fundamental diagram that uses light as the catalyst.

Notice that Carbon Dioxide combined with water under the influence of light change form into sugar and oxygen. Yet, nowhere in this formula does it mention the transforming chlorophyll molecule. As a side, note that the chlorophyll molecule is a specific arrangement of carbon, hydrogen, oxygen, nitrogen and magnesium.

To the right is a Chlorophyll a diagram form Wikipedia.

At the heart of the Chlorophyll molecule is a formation that gets its own name, the porphyrin. Fortunately, the internet provides great descriptions of what this molecule is.

A porphyrin (pronounced POR-fur-in) is an organic compound that contains four pyrrole rings. A pyrrole is a pentagon-shaped ring of four carbon atoms with a nitrogen atom at one corner (C4H5N).

So basically, at the core of the Chlorophyll molecule is the porphyrin which, in this case, holds Magnesium (Mg) as the key mineral.

I know that these diagrams may seem a little complex, but there is a great little article located here that helps explain the connections.

Ok, so back to the basic formula; Carbon Dioxide, water and light, under the influence of the Chlorophyll molecule transforms these two common elements into sugar and oxygen. Great. Looking a bit closer, the process of converting light energy into chemical energy is known at the Calvin Cycle. This all sounds simple enough, but the puzzling part is still – what does the light do?

Maybe looking at the unwinding process may shed some ‘light’ on the topic. When we consume these sugars created through photosynthesis and add oxygen, Cellular respiration can occur which ‘releases’ the stored energy. Looking closer at the Wikipedia’s definition of cellular respiration we find:

Cellular respiration, also known as ‘oxidative metabolism‘, is one of the key ways a cell gains useful energy. It is the set of the metabolic reactions and processes that take place in organisms‘ cells to convert biochemical energy from nutrients into adenosine triphosphate (ATP), and then release waste products. …

Following the link to the electron acceptor we find:

The electron accepting power of an acceptor molecule is measured by its electron affinity which is the energy released when filling the highest unoccupied molecular orbital.

And, finally, when we follow the link to learn a bit about the molecular orbital we find:

In chemistry, a molecular orbital (or MO) is a mathematical function that describes the wave-like behavior of an electron in a molecule. This function can be used to calculate chemical and physical properties such as the probability of finding an electron in any specific region.

If existence where this simple, it would seem that the chlorophyll molecule has the ability to focus specific wavelengths of light that excites atoms so that the electrons move to higher molecular orbits that allow for the natural formation of higher ‘energy’ molecules.

Now, what about that light?  From Wikipedia, we find that: 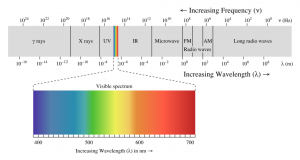 Following the link to electromagnetic radiation we can read that:

Electromagnetic radiation (often abbreviated E-M radiation or EMR) is a phenomenon that takes the form of self-propagating waves in a vacuum or in matter. It consists of electric and magnetic field components which oscillate in phase perpendicular to each other and perpendicular to the direction of energy propagation. Electromagnetic radiation is classified into several types according to the frequency of its wave; these types include (in order of increasing frequency and decreasing wavelength): radio waves, microwaves, terahertz radiation, infrared radiation, visible light, ultraviolet radiation, X-rays and gamma rays. A small and somewhat variable window of frequencies is sensed by the eyes of various organisms; this is what is called the visible spectrum, or light.

Scrolling down in the definition of light, we find a great chart that shows all the different wavelengths of ‘light’.

Also notice that ‘light’ is a specific type of Electromagnetic radiation.

This leads to a series of questions:

If electromagnetic energy is released by the body as it ‘harvests’ the energy stored atomically, does that make light a waste product? Also, if that energy escapes the body, does it affect other living organisms?

Because Chlorophyll and Hemoglobin share a molecular structure that is nearly identical, is there some process – related to electromagnetic energy – that the Hemoglobin molecule performs in the body? For instance, if Chlorophyll focus light so that it transforms atoms into higher energy states, might the structure of the hemoglobin molecule help focus the release of that stored electromagnetic energy?

There are so many puzzles in life, yet this one has sparked my curiosity this week.

I hope that these words have sparked a bit of truth in you.

12 thoughts on “Is food another form of light?”