A number of months ago, I came across an article about an old man that used dandelion root powder to treat his cancerous prostate back to health. A copy of that article can be found one Rense.com here. The article seemed reasonable and I read it a number of times to see if I could find discrediting discrepancies. Well, I couldn’t.

Generally, I have an eye for filtering out articles that are just fluff or misleading propaganda, but this article has a recipe for making the powder that rings true with what I’ve studied and what I’ve already proven to myself to be the truth.

I would encourage you to go read the article. If the article is no longer on Rense.com (as linked to above) just Google up “dandelion root powder prostate cure” and it will most likely be one of the top hits.

Back to the recipe; I’ve cut the important parts from the article and quoted them here:

To make the powder from the dandelion root you must follow my directions to the letter. Any changes and it won’t work. Dig a handful of dandelion roots any time of the year, it doesn’t matter. Cut the leaves off just below the crown. DO NOT WASH. Then they must be dried around 100 degrees. I do it in an incubator with no water. You can also dry them under a heat light bulb if you raise or lower it so it’s 100 degrees. You can also use the sun or put them in the attic if it’s not too hot. It takes about 5 or 6 days in the incubator. I have not done this all the way under the heat light. When you break a root and it snaps it is ready to powder. Take an old iron frying pan and a clean hammer. Take one root at a time and place in the frying pan and start tapping. Don’t hit hard or it will fly all over the place. I put my hand around the root to keep most of it in the pan. If it sticks to the hammer and pan, and doesn’t crumble in your fingers, it isn’t dry enough. Keep it up until you have enough to start. It takes about 20 minutes to ? hour to prepare enough for a week. When you get used to it you can go much faster.

I have an old vessel that druggists used to pound pills, this goes much faster. DO NOT USE AN ELECTRIC GRINDER, it won’t work if you do. You lose too much of the good part in dust. You must do it as I have said or don’t do it at all. I’ve tried shortcuts, but it seems someone was looking over my shoulder, and I know when I made a mistake. I’m just an old farmer and not a scientist, so I wouldn’t know the correct amount to take on my own. Now take a little over one half teaspoon once a day at any time and mix it with water, orange juice, etc.. Do not use in soft drinks, liquor, or anything hot. When mixed, use it all. Don’t let it stand around. Keep the power in a dry place. After taking it three or four days, you will feel good, but nothing else. That is because your blood is building up. When you blood is happy, you’re happy. In most cases, this will build your immune system in from three days to three weeks to the point it takes back control of cancer cells and thus the cancer stops spreading. In most cases it is going to help. There is no body feeling as it works. You just feel a little better each week. After three weeks most of the pain will be gone in your back and you know it’s working if you had pain there like I did. If you have bone cancer in the spine, it will take three months to work. This is not an overnight cure. It took a while to get in this condition and it will take a while for your body to heal. The sooner you start, the quicker you will be over cancer. Young people heal faster than old people, but it will help at any age. I know because I’m 80 and have been taking it for over three years.

Going back to not washing the roots and leaving a little soil on them, it is for your own good. A good bit of immunity comes from the soil, it starts as soon as you are born. Your fingers touch something, and you put them in your mouth. A little dirt at first, and more as you grow older and start crawling. Then everything you touch goes in the mouth. When children go outside to play and when they come in, they are the dirtiest around the mouth and hand. The hands go in their mouths no matter how dirty they are. Many diseases and bacteria live in the ground, but they don’t seem to cause any trouble but it does build up the immune system. Some animals can’t live if they can’t eat a certain amount of soil. If you read this article over, you will see it! all goes back to common sense. I wish all of you people with cancer and other problems the best.

Things that stand out as key are:

Because I like to do projects like this, I set out to create some powder that I could experience on my own. The only difference was that instead of using the tools that he mentions, I would use my own but still honor the principle that the medicinal properties are heat sensitive and water soluble – thus no heating and no washing.

Last week I visited a friend’s place where I’d seen beautiful dandelions earlier this spring. She doesn’t use chemicals on her plants and honors the spirit of the land. I figured this would be a perfect place to dig. The tool that I used was a pick-axe. When you dig a dandelion root, the pointy part of the pick will allow you to soften the ground so you can easily pull the weed and get a large section of the root. Using this technique, I dug a 1 gallon pale full of dandelions (tops and roots). The only cleaning that I did was to tap the root on the handle of the pick in order to get most the dirt off.

When I got home, I clipped the leaves off just down to the crown of the plant. I didn’t take clear of the tops like I should have, but if I’d spent more effort to keep them clean I could have made juice from them. I’ll take better care next time. After clipping, I also tapped them again to see if I could get more dirt off them before putting them in the dehydrator.

I set the dehydrator at 105 degrees knowing that enzymes break down when you heat vegetables above about 118 degrees. The original recipe calls for 100. 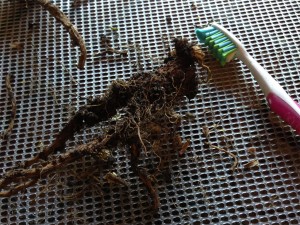 As expected, each root shriveled down to next to nothing and after brushing the bulk of the remaining dirt, I had a plate full of roots. 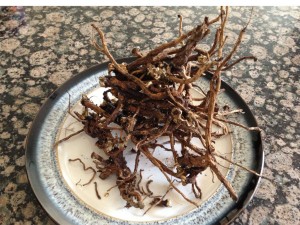 Here is where my process differed slightly from the old farmer’s technique. I used a Vitamix to ground up the roots to something that could then be ground further with a mortar and pestle. 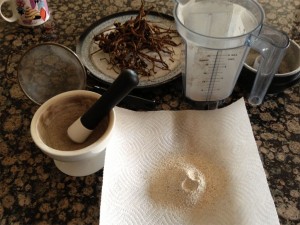 If you grind anything too long in a Vitamix, you’ll heat it up. Thus, you have to be careful to remove the flour from the chunks. The flour will heat up quickly if not removed. Notice in the picture (above) that I’ve got a sifting screen. I placed some of the roots in the blender and ground for a few seconds. I then waited for the dust to settle in the blender and I sifted the chunks from the flour. You can see that on the paper towel.

Next, I spent over an hour hand grinding the fine chunks down into a powder. Note that when hand grinding the product will heat up. Any time you apply force to break something down, it generates a little heat. To help mitigate this, I would grind for a while and let it cool. This worked well because it’s tough work! I needed to rest on a regular basis. 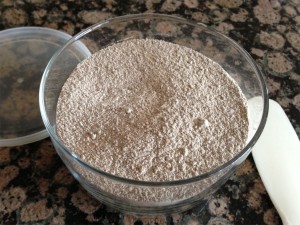 When I dug the small bucket of dandelions, I thought that I wouldn’t get much product. Well, as it turns out, I got nearly two cups! This is way more than I was expecting. Next time, I’ll be a bit more selective with the plants and reduce the quantity. I’d rather have fresh powder than year old stuff.

To see if I’d reduced it down correctly, I put a teaspoon worth in a small amount of water, stirred it until it was absorbed and gulped it down. There were still chunks that were big enough to chew – which I would guess would be ok, but the bulk was fine enough to swallow without worry. After rinsing and chasing it with what was left on the edge of the glass, I noticed that there was a few grains of dirt in the bottom of the glass.

At this point, I packed a few jell caps with the powder. I measured the quantity and 2 -3 jell caps add up to ½ teaspoon.

Now the fun part will be to include this in my diet in some useful way. If it really does improve the immune system, well, I’ll look to see if I get a cold this fall.

Anyone want some dandelion powder?

Another link that talks about it, but no testimonial.